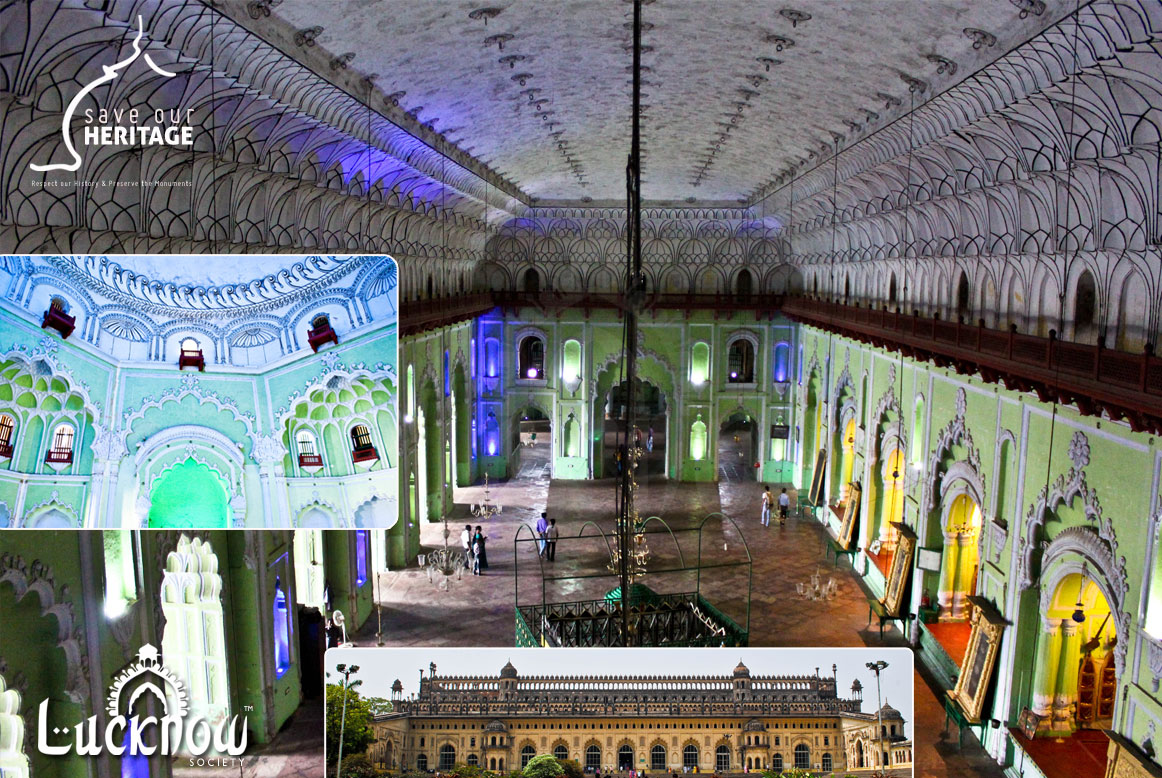 Bada Imambara was built by Nawab Asif-ud-daula in the year 1784. It is also known as Asifi Imambara in the honour of the builder. Bada Imambara is admired worldwide for it’s unique architectural design, grandiosity and puzzling staircase labyrinth. The main hall of this complex is 162 feet long and 53 feet 6 inches wide. It’s considered to be the largest vaulted chamber in the world. The main hall has a whispering gallery on top on all the four sides. When someone whispers, burns a match stick or tears a paper at some point close to the wall, the same sound gets reflected round the wall of the gallery. This echoed sound can be distinctly heard from one end of the gallery to another. European decoratives such as chandeliers, mirrors, lamp stands, etc add stars to the beauty of this hall. What actually amazes the people who visit this vaulted hall is it’s arched roof, which is constructed without the use of iron beams! This structure is more than 200 years old and it was even used as an arsenal years back. Huge mortars and guns were dragged on it’s floors during the mutiny of 1857. But surprisingly not even a single brick has fallen from the vast vault. It also serves as a mausoleum for Nawab Asif-ud-daula. ‘The exact name of Nawab is Asif-ud-daula but it was later when it was diluted as Asaf-ud-daula by the European writers’, says Mr. Roshan Taqui, an eminent historian of Awadh. On the sides of the main hall are two octagonal compartments. The one on the east has windows and balconies (Jharoka) while the other on the west has a ribbed vault that seems like lines on a melon fruit. ‘The hall on the west also houses the taazia of old woman (also famous as budhiya), who is believed to gift her land that came in the way of imambara plan to Nawab Asif-ud-daula on a condition that her taazia should be placed at the Imambara, every year during Muharram. The Nawab not only fulfilled her wish but also housed her taazia permanently in this compartment’, states Mr. Taqui.

The history of this monument dates back to the reign of Nawab Asif-ud-daula. He was not only a mere administrator of Awadh but also a friend and fraternal angel of the poor. Awadh was hit by famine in the year 1784. In order to offer employment to the famine-stricken people of Awadh, he established a trust ‘Rifa-e Aam’, with an objective of bringing relief to all. Undertaking this responsibility, Nawab Asif-ud-daula started with the construction of Bada Imambara in 1784. The design of this structure was drafted by Kifayat-ullah. And with this initiative, Nawab succeeded in providing work to about 22,000 people at a time. It is said that during the daytime ordinary people used to build up this edifice while noblemen, who did not wanted to be recognised as labourers during daylight were called after the sunset to demolish the structures raised. It took them 10 years to build Bada Imambara and the estimated cost of the construction of this immense edifice came to Rs. 1 crore, which was a huge amount back then. The complex of Asifi Imambara, which is constructed in Mughal architectural style, consists of Asifi Mosque, Bawli (water reservoir), Bhul Bhulaiya (labyrinth), Naubat Khana (where drums were beaten to announce the hour of the day) and the Main Hall. Adjacent to this complex is a huge gate which is famous as Rumi Darwaza. Entrance to the Imambara is through two successive gateways. Both of the embellished gateways are triple-arched and huge in size. The interior passage that leads to the various structures of the complex is surrounded by lush green gardens.

The state-of-the-art architecture of this building has even confused the modern architects. Moreover, the epic beauty of Indo-Islamic structural design with huge turrets, domes and minarets has always appealed the tourists. Even the directors from the Indian film industry are leaving no stone unturned in order to bring the splendid charisma of this monument on the big screen. Sudhir Mishra’s much talked about next Mehrunnisa, that is said to be starring Amitabh Bachchan, Rishi Kapoor and Chitrangada Singh is going to be shot amidst the background of Bada Imambara pretty soon. People who keep visiting different monuments in the city, find Bada Imambara as their favorite amongst all. “Never get bored of visitng this monument over and over again. Every nook and corner of this serene place tells it’s own story”, says Ms. Anumeha Tewari, an Art student. “It’s a feeling of pride for me to show this masterpiece to my relatives who have come here from a different city”, says Mr. Rajendra Mishra, a businessman. Such monuments narrate us the story of an era gone by. We should be proud of them as they are our national heritage. But the reality is a bit different. The walls of the halls are found damaged in many ways. Visitors have written their names or have scribbled gibberish with sharp objects like stones on it. Not only this, but patches of betel juice, which they spit at the facade walls, is also a common sight. And this is how ignorance can unfortunately result in minimising the glory of such a grand monument.