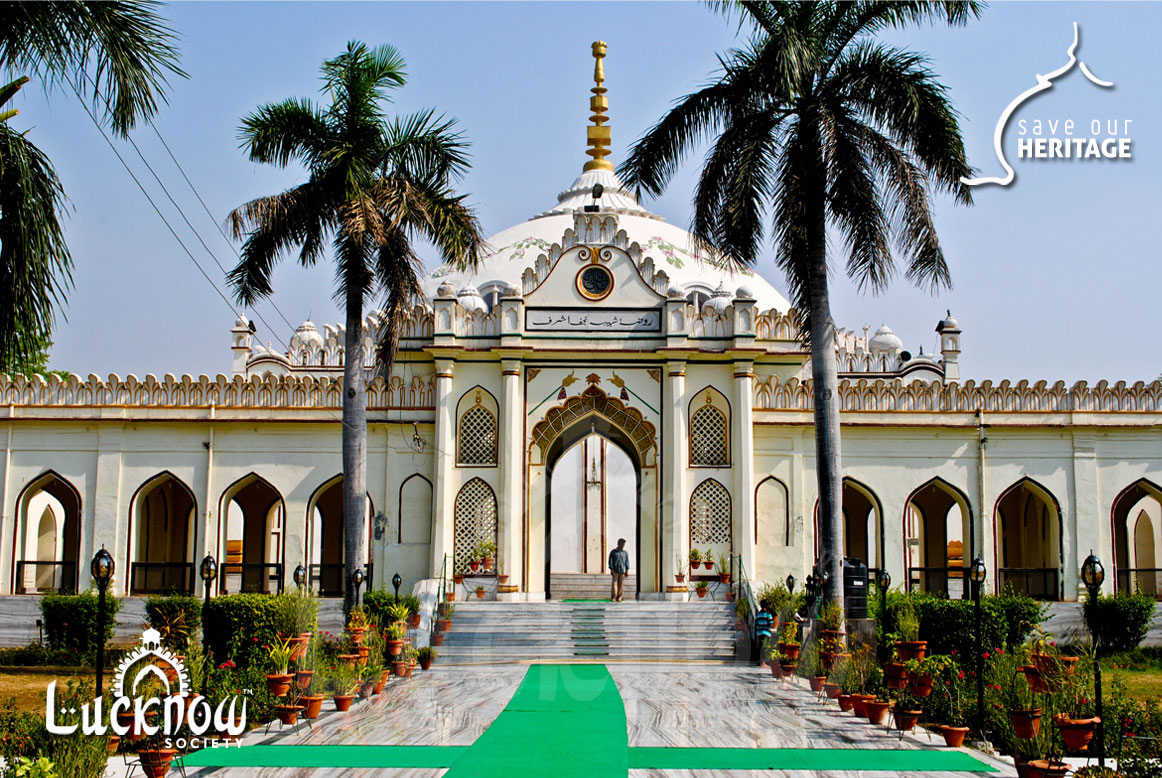 Showcasing an impressive view when adorned with lightening on the birthday of Hazrat Ali, Shah Najaf Imambara stands tall with all its grandeur new Sikander Bagh. Built by Nawab Ghazi-ud Din Haider (1814-1827) at a place called Paltan Ghat on the banks of the river Gomti, this Imambara serves as a mausoleum to the Nawab’s own mortal remains. The mausoleum stands midst a plush green garden that adds stars to the beauty of this place. Double-arched doors serve as an entrance to the interior of the Imambara. Most of the Imambaras in the city of Lucknow have domes as a part of their architectural feature but the dome of this Imambara is quite unique in its own way. The hall of the Imambara is decorated with majestic chandeliers. It not only houses the tomb of Nawab but also his wives. Mausoleum of Nawab Ghazi-ud Din Haider is adorned with silver while that of his European wife Mubarak Mahal has work done with silver and gold. Legend says the roof of the Imambara was constructed with 9 mann gold rods. It also houses wooden and bamboo Tazia which are carried during Moharram.

According to the renowned Historian of Awadh, Mr. Taqui, “Shah Najaf Imambara is a replica of Hazrat Ali’s burial place at Najaf in Iraq. As Nawab Ghazi-ud Din Haider was a devotee of Caliph Hazrat Ali, who was also known as Shah-e Najaf (Lord of Najaf), so the building was named after him.” The holy mausoleum was built by the Nawab for the interment of his own mortal remains. He was buried here in the year 1827. It was several years after his death when two of his begums, Mubarak Mahal and Mumtaz Mahal were also buried at Shah Najaf Imambara. The building is surrounded by walls of such immense thickness that the heavy guns of the Naval Brigade during the mutiny of sepoys were unable to make any impression on them. It also offered the mutineers a perfect position for defence. Presently, one of the back domes of the structure has crumbled. Moreover, the front lawn of the Imambara is used as a venue for marriages which is not healthy exercise for any heritage monument. Qadam Rasool, which is a part of this complex is in an awful shape. All in all, poor renovation of this monument has been done till date. Furthermore, the area comprising this monument should be strictly declared a heritage zone.