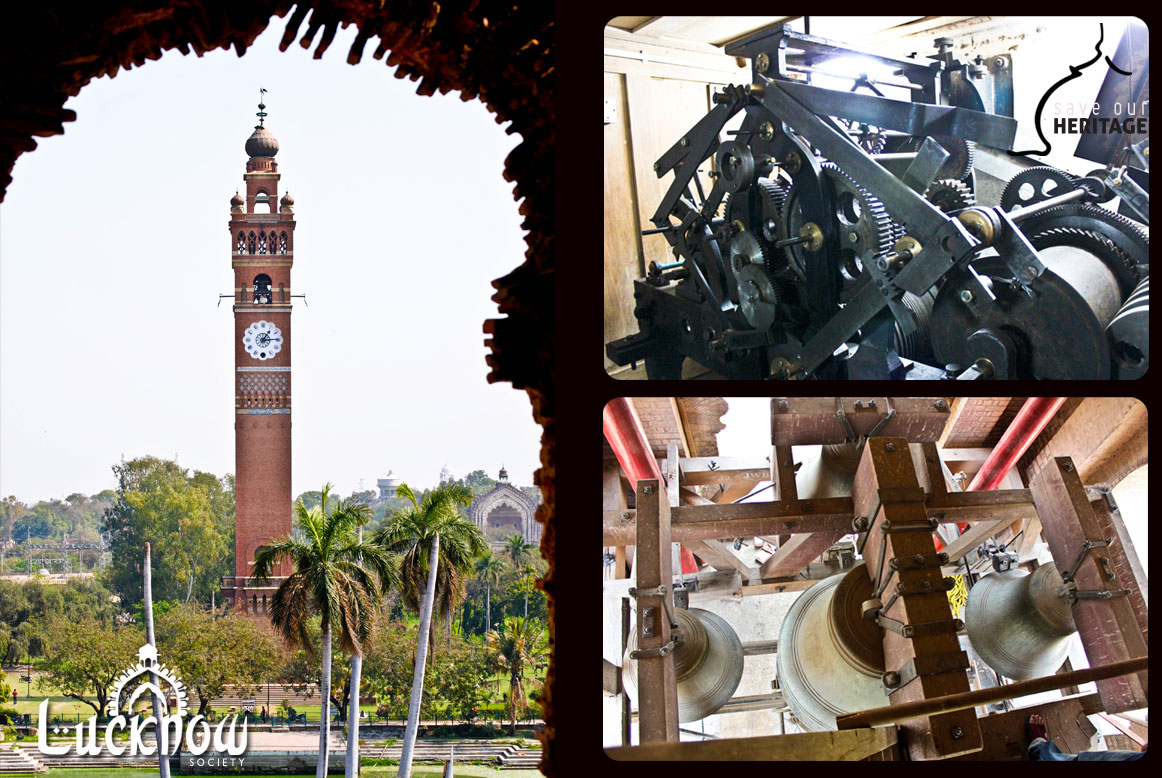 Ghanta Ghar, Hussainabad is the tallest clock tower in India. It is 221 feet (67 metres) high free-standing clock tower situated in the core of the old city of Lucknow. The wheel of the clock is said to be larger than that of London’s Big Ben. Between Bara Imambara and Chota Imambara, this impressive clock tower stands amidst a green field with all its elegance. It was designed by Roskell Payne. The architectural style of this edifice has influence of Victorian-Gothic design. This square tower is made up of red bricks and has four clock faces. Each clock face has a 12 petalled flower shaped dial, where these petals signify the hours. “The spare parts of these clocks are made up of gun metal and were imported from Ludgate Hill, London”, states Mr. Roshan Taqui, a prominent historian of Awadh. The gigantic clock’s design, concept and creation was done by James William Benson, the famous clock maker of England. At the zenith of the tower, can be seen a wind-vane, in the form of birdlike structure which is mounted over a small shiny dome. This edifice is a fine example of British architectural skills. The majestic Ghanta Ghar was erected in the late 19th century (1882-1887), by the Hussainabad Endowment in honor of the first Lieutenant Governor of the United Province of Awadh and the North Western Province, Sir George Couper, during whose administration and under whose endorsement did the management reform and improve. The total cost of construction came to Rs. 1.75 lakhs approximately, which was quite a luxurious amount in those days. The gongs of the clock give a different musical chime for every time it rings. The top view of the entire Hussainabad area still encircles the area’s old charm and it looks flawlessly beautiful when seen from the tower !

“I have seen so many clock towers, but this one is amazingly different. Huge and magnificent!”, says Mr Ankur Nigam, a tourist. “Seeing it’s reflection in the nearby pond, makes it look even more beautiful”, says Ms Soniya Diwan, a student. There was a time when people rarely had wrist watches, in order to know the time, they used to depend on the nearby clock towers. These clock towers always taught them how to value time. But now the same clock towers are just treated as mere landmarks synonymous to their locations. Clocks of the Ghanta Ghar went dysfunctional in the 1980’s. But daring initiative of the locals have finally made it tick again, which itself needs restoration now as it is not working properly. Hussainabad’s Ghanta Ghar is now standing deserted in the midst of scattered filth, like- empty beer cans and plastic bottles, used cigarette butts etc. and having scribbled gibberish on it’s outer walls. Telling time is hardly the role of clock towers anymore. But they still attract crowds due to it’s rich historical background !