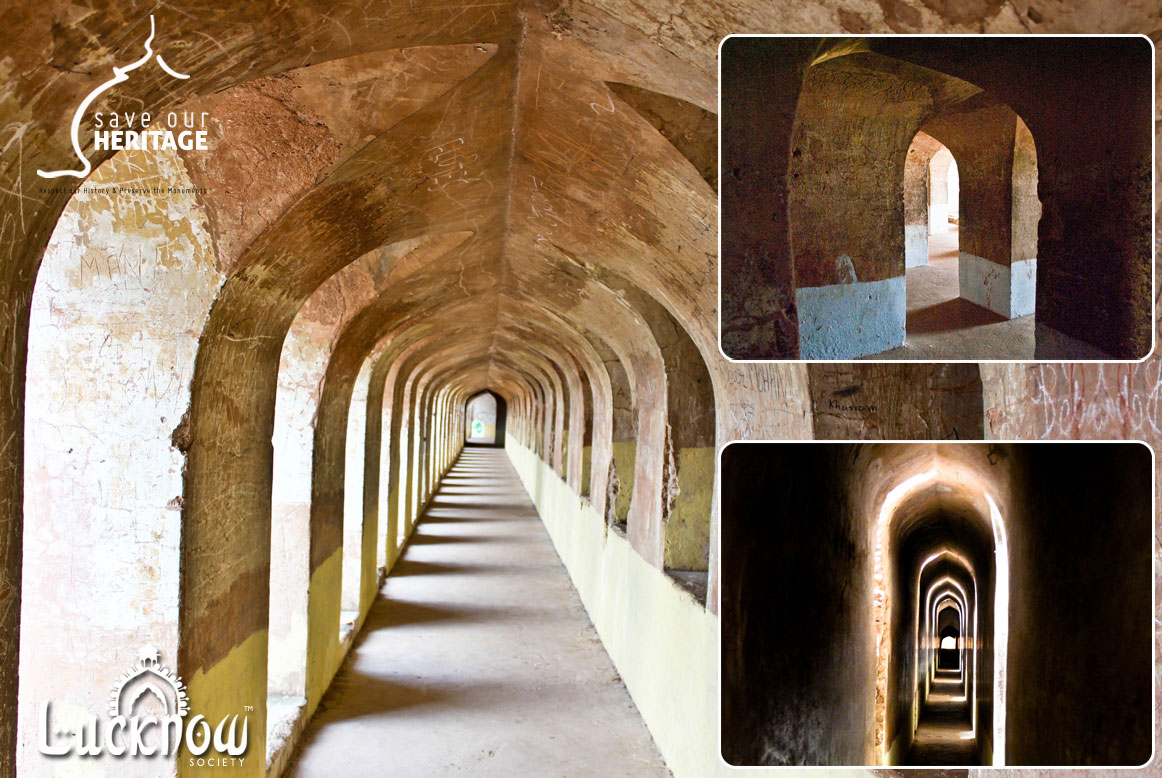 One of the world’s most confusing maze, popularly known as Bhool Bhulaiyya, was built by Nawab Asif-ud-daula in the year 1784. This lofty and touristy labyrinthe is a momentous part of the complex of Bada Imambara. The way to the left of the central hall of Bada Imambara leads to Bhool Bhulaiyya, which is a series of hundreds of interconnected darkling-narrow stairway passages present above the hall of Bada Imambara, where different paths lead astray the visitors by directing them to the dead-ends, rooftop or back to the entrance and exit points. It is so perplexing that the right path seems to be the wrong one and vice-versa, portraying the secret of life. These dark marginal lanes can make anyone feel lost while searching for the right paths. But penetrating sunlight from the various facade openings like rooftop, arched-windows etc., do help the visitors in minifying the mystery of this puzzling maze and those who still find this maze very confusing can take the help of the guides who are always available there during the visiting hours. ‘This maze has a series of around 489 indistinguishable door-less galleries and hundrerds of staircases’, tells the guide, Mr. Ahmad. Another important feature of this maze that makes it renowned wordwide, is its incredible acoustics. The architectural design of this maze has been implemented in such a way that it makes room for good air ventilation and penetration of sunlight. When one whispers or burns a match-stick near the walls of the passage, then the same sound can be heard from the several twists and turns of the same passage leaving the visitors completely astonished. Furthermore, the same maze leads to the serene rooftop of the courtyard of Bada Imambara. From the front windows of the balcony, one can have a clear vision of the visitors upto the main gate and the road, which enhances the security as well as the architectural wonder of this edifice. Most of the visitors find it as the best part of the building as they can have the bird’s eye view of the various other monuments like Rumi Darwaza, Asifi Masjid, Hussainabad Clock Tower and the busy streets of the old area of Lucknow as well. There is also a myth about a blocked tunnel that once served as a secret underground passageway to the other cities.

It was Nawab Asif-ud-daula who had got this structure built during the years 1784-1794, in order to provide food and work to the famine-stricken people of Awadh. The design of this structure was drafted by Kifayat-ullah. And with this initiative, Nawab succeeded in providing work to about 22,000 people at a time. It is said that during the daytime ordinary people used to build up this edifice while noblemen, who did not wanted to be recognised as labourers during daylight were called after the sunset to demolish the structures raised. It took them 10 years to build Bada Imambara and the estimated cost of the construction of this immense edifice came to Rs. 1 crore, which was a huge amount back then. This famous edifice of Lucknow has the largest number of tourists visiting it every year, making it the most popular and hence, the most visited monument of Lucknow. ‘Beaming of sunlight through the various openings of the facade, inside the symmetrical corridors showcase the amazing view of Bhool Bhulaiyya’, says Mr. Prashant Sonkar, an avid photographer. ‘This is something I haven’t ever experienced in my life before. I would certainly recommend my friends to visit this amazing labyrinthe atleast once. It serves a wonderful example of brilliant architectural skills of those times’, says Ms. Akriti Rastogi, a tourist from Mumbai. Insincerity of the visitors towards their country’s proud historical testaments is posing them a great threat. Doodling or etching names, numbers and other love and hate details on the walls of the galleries not only causes irreparable damage to the walls of the edifice but also to the cultural heritage of the country as well. People should realise that these monuments are a part of their rich cultural legacy and instead of blaming others for the harm that is done to such monuments, they should individually come forward to conserve them.