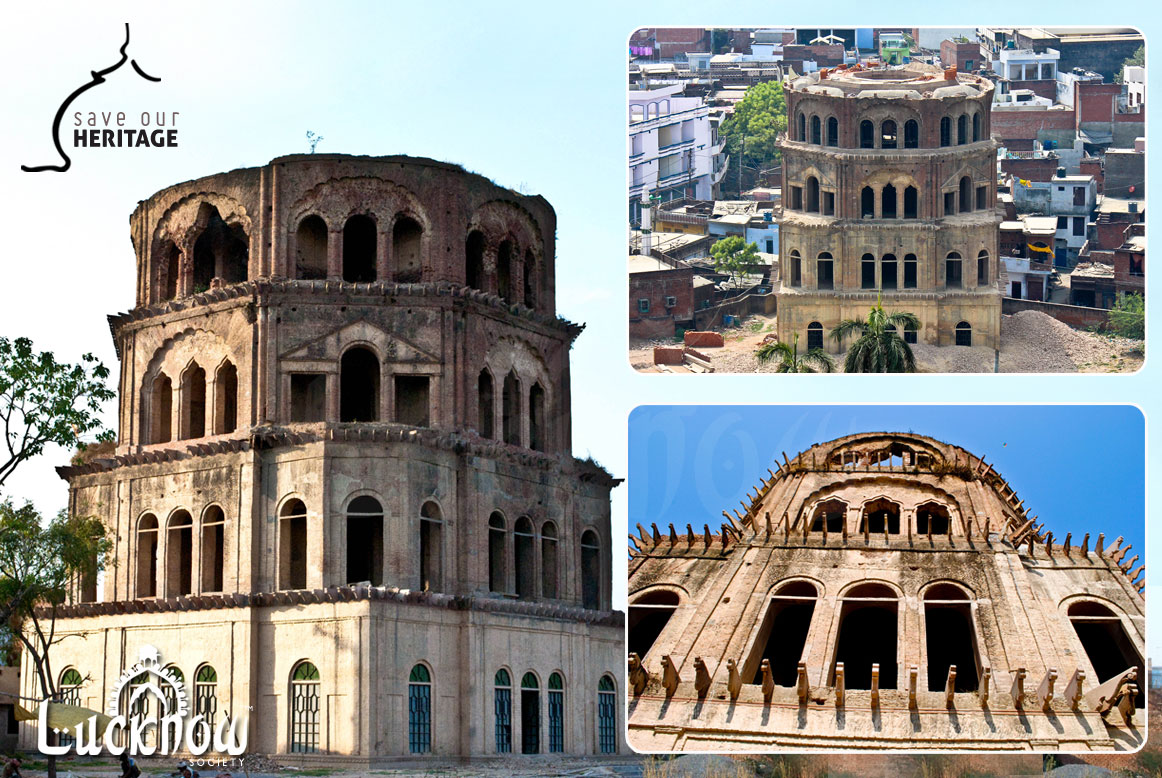 The word ‘Satkhanda’ means Seven-Storeyed. Initially, this building was intended to comprise seven storeys but it’s construction work was later abandoned and thus, only 4 level of it could be completed. Incomplete but nevertheless splendour of heritage architecture, Satkhnada, a red-brick watch-tower, constructed by King Mohammed Ali Shah, is situated near the Chota Imambara. Satkhanda, a four-storey tower, has got it’s architectural design influenced from ‘The Leaning Tower of Pisa’, one of the seven wonders of world. The tower is constructed in a blend of Greek and Islamic architecture. It’s framework and pediments reflect Greek structural design whereas arches of the gates and windows show influence of Islamic structural design. The height of the octagonal ground floor of this structure is almost 10 feet, making it the highest storey of this tower. One of the distinctive feature of this structure is that each of it’s successive storey has been constructed in the decreasing order of height and breadth of it’s base storey. The total height of Satkhanda is 35 feet approximately. The tower has numerous triple-arched huge windows and compartments. A flight of spiral steps leads to the different storeys of the building. From the uppermost storey of the facade, one can see the beauty of the city’s adjacent area.

The construction work of Satkhanda was initiated by King Mohammed Ali Shah during his reign in the years 1837-1842. He built it as a watch-tower with an intention of having the bird’s eye view of the old city area of Lucknow along with it’s royal buildings. There is also a myth about the building that it was constructed for having a sight of chand for Eid. ‘It’s said that the construction of this structure was stopped as the king had hurt his leg while climbling down the stairs of this structure while it was being constructed. And since then, people started treating it as a bad omen and left it unfinished. But this is a fake rumoured story as Mohammed Ali Shah was 65 years old when he was elected as the king of Awadh and at the same time he was not fit with his hands and legs, therefore, not being in a condition to climb the stairs of the tower’, states Roshan Taqui, the prominent historian of Awadh. ‘It’s exquisite designs and marvelous layout makes it a must-see edifice of Lucknow’, says Brijesh Yadav, a student. ‘Being lured by just seeing the unfinished tower, has left me wondering as to how amazing it would look when it’s renovation gets completed. Waah Lucknow!’, says Geeta Srivastava, a home-maker. Inspite of the fact that the renovation work has been taken up and guards have been assigned the duty to look after the safety of the edifice, the tower still stands deserted with just animals prowling around. The pathway to it is uneven and dirty. Adding to the grievance, the backside of the tower is treated as a dumpsite for household wastes and is also a safe place for drug traffickers.